We are a very open and welcoming congregation. Our Sunday services start at 11.00am, and over a month we celebrate Holy Communion, Morning Worship and a third Sunday service with Taizé, Celtic or other forms of worship. We also meet on Thursdays at 8.00am for Morning Prayer. The village shop and café welcomes us for a bi-monthly ‘Café Church’ which usually includes a guest speaker. A highlight of village life is the Stations of the Nativity just before Christmas each year, in which the Christmas story is retold around the village.

Men's Breakfast is held in Ashbury Village Hall on the last Saturday in the month at 8am. Everyone is welcome (you don’t have to live in Ashbury) and we provide a full English breakfast plus the chance to talk and put the world to rights. There is no charge but we do ask for a small donation to cover costs; any surplus is donated to charity at Christmas time.

This monthly discussion group will meets at 8am on the first Saturday of the month at various different venues. Everyone is welcome; we generally have a simple (but excellent!) breakfast before looking at the bible passage for the following week and see where the conversation takes us.

St Mary’s is the parish church for Ashbury, Kingston Winslow, Odstone and Idstone. The first church in Ashbury was built for the Abbot of Glastonbury sometime before AD 947, with the present church constructed on the same site in the twelfth century. The building would probably have been cruciform in plan, with a nave and entrances to north and south. Through the ages the church has been enlarged and altered to make it the building it is today. The west end is 12th century, the chancel with its three medieval brasses is 14th century and the tower and north and south chapels are 13th century. A detailed history can be found in the church.

The tower originally housed five bells, which were cast in 1733 by Henry Bagley III. The two largest were recast in 1845 by Taylors of Oxford, and a treble by Mears &B Stanbank was added in 1873. There is also a Sanctus bell, cast in 1800 by James Wells of Aldbourne.

In the latter half of the 20th century, the bells were partially rehung and this resulted in the bells being in the order 6, 5, 4, 3, 2, 1 which is “anticlockwise” and thus rather unusual.

As well as ringing for services, the ringers meet to practice on Thursdays at 7:30pm. 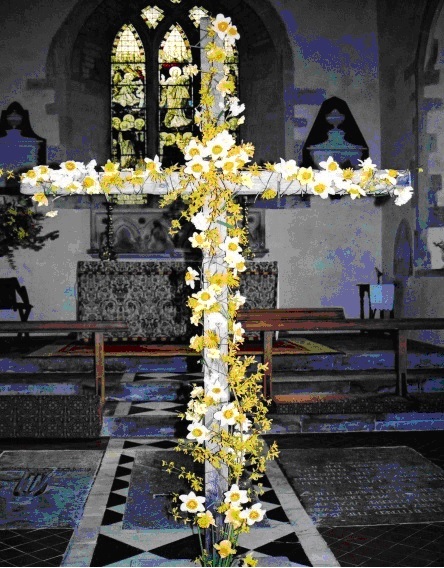